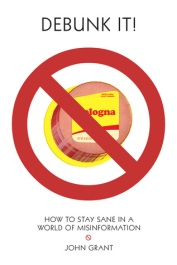 Recommended grade level: 7 and up

Summary: We live in an era of misinformation, much of it spread by authority figures like broadcasters, politicians, and religious leaders. (The various pundits on blogs and websites don’t help either.) With so much bogus information from so many sources, how can anyone be expected to discover the truth?

In Debunk It!, author John Grant uses modern, ripped-from-the-headlines examples to clearly explain how to identify bad evidence and dismantle poor arguments. He provides a roundup of the rhetorical tricks people use when attempting to pull the wool over our eyes, and even offers advice about how to take these unscrupulous pundits down. So if you’re tired of hearing blowhards spouting off about climate change, history, evolution, medicine, and more, this is the book for you. Debunk It! is the ultimate guide for readers seeking a firmer footing in this very slippery world. (Source)

Who will like this book?: With such timely subject matter, there should be plenty of teens, parents, teachers, and librarians who are interested in what Grant has to say.  He includes strategies that can be applied to any argument, and examples of his strategies being applied to some major debates currently occurring in our society.  This is an effective instructional method, because it both debunks specific hoaxes readers are likely to encounter, and teaches them how to debunk new hoaxes that arise.

Who won’t like this book?: Grant uses the word “bullshit” as his term of choice for any misinformation; the word is used about twice per page.  This may turn off some language-sensitive readers.  Although the book is nonpartisan, the “bullshitters” he discusses are more often conservative than liberal.  You could argue that he’s biased, or you could argue that, as Stephen Colbert says, “Reality has a well-known liberal bias.”  Either way, I could see this book angering certain conservatives.  (Note that Grant does criticize liberals too, however.)

Other comments: As funny as it is, I wish Grant had laid off on the use of the word “bullshit.” I think this would have reached a broader audience without it.

Readalikes: John Grant has several other books about bogus science and conspiracy theories. (Check them out on his Goodreads page.) For the younger set, there are some books about common fallacies for kids such as Myths Busted! Just When You Thought You Knew What You Knew by Emily Krieger and Think Again! by Clive Gifford. Also, point interested readers to snopes.com, which is both credible and entertaining.