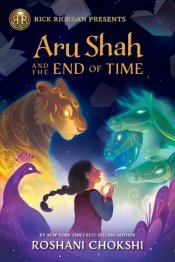 Recommended grade level: 4 and up

Summary: Twelve-year-old Aru Shah has a tendency to stretch the truth in order to fit in at school. While her classmates are jetting off to family vacations in exotic locales, she’ll be spending her autumn break at home, in the Museum of Ancient Indian Art and Culture, waiting for her mom to return from her latest archeological trip. Is it any wonder that Aru makes up stories about being royalty, traveling to Paris, and having a chauffeur?

One day, three schoolmates show up at Aru’s doorstep to catch her in a lie. They don’t believe her claim that the museum’s Lamp of Bharata is cursed, and they dare Aru to prove it. Just a quick light, Aru thinks. Then she can get herself out of this mess and never ever fib again.

But lighting the lamp has dire consequences. She unwittingly frees the Sleeper, an ancient demon whose duty it is to awaken the God of Destruction. Her classmates and beloved mother are frozen in time, and it’s up to Aru to save them.

The only way to stop the demon is to find the reincarnations of the five legendary Pandava brothers, protagonists of the Hindu epic poem, the Mahabharata, and journey through the Kingdom of Death. But how is one girl in Spider-Man pajamas supposed to do all that? (Source)

Who will like this book?: Weaving myth into modern-day reality is a tried-and-true formula that will be familiar to many readers, mostly thanks to Rick Riordan. Fans of the trope will embrace this book. Those familiar with Hindu mythology should be pleased to see it in middle grade fiction, and those unfamiliar will have a whole new world of stories opened up to them. This is a sweet and warmhearted book with a lot of girl power.

Who won’t like this book?: Though it stands out from most other modern-day mythology-based fantasy because it focuses on Hindu myth, this still doesn’t stray far from the formula, and some readers may be bored with that. There is no young human male character, which may unfortunately cause some guy readers to balk. The story is somewhat episodic, which could trip up some reluctant readers.

Readalikes: This is the first book from an imprint by Rick Riordan, and it certainly does appeal to the same audience as Riordan’s Percy Jackson books and related series. For more fantasy based on Indian and Hindu religion and culture, see The Serpent’s Secret by Sayantani DasGupta, The Savage Fortress by Sarwat Chadda, and Pashmina by Nidhi Chanani. For more middle grde modern-day stories of gods and mythological creatures mingling with humans, try Loki’s Wolves by Kelley Armstrong, the Seven Wonders series by Peter Lerangis, The Night Parade by Kathryn Tanquary, and Gods of Manhattan by Scott Mebus.