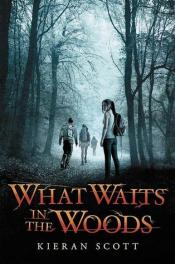 Traditional horror that will scratch the itch for casual genre fans.

Recommended grade level: 7 and up

Summary: For city girl Callie Velasquez, nothing sounds more terrifying than a night out in the wilderness. But, wanting to bond with her popular new friends, Lissa and Penelope, she agrees to join them on a camping trip. At least Callie’s sweet new boyfriend, Jeremy, will be coming too.

But nothing goes as planned. The group loses half their food supply. Then they lose their way. And with strange sounds all around her–the snap of a twig, a sinister laugh–Callie wonders if she’s losing her mind.

Tensions swirl among the group, with dark secrets suddenly revealed. And then, things take a fatal turn: Callie stumbles upon a cold dead body in the woods.

Is the murderer close by, watching them? Callie has to figure out where she can turn and who she can trust, before her own life is at stake. (Source)

Who will like this book?: Quick, fun, and uncomplicated, this is a great crowd-pleaser for booktalks. A great choice for the reader who likes horror movies. I think middle schoolers who don’t generally read a lot will warm up to this book.

Who won’t like this book?: This probably won’t be blowing anyone’s minds. The plot and character development are not especially surprising or sophisticated, and might not hold the interest of readers with a lot of experience in the horror genre or who spend a lot of time reading in general.

Other comments: There’s significant gore and death in this book. I’m a little iffy on some of the messages it sends about mental health. I didn’t find it terribly offensive, but it does include a scary depiction of a mentally ill person that is highly unlikely and possibly not helpful to the conversation on mental illness.

Sequel(s): No direct sequels, but the author has a related book called What Waits in the Water (2017)

Readalikes: This reminded be a lot of a Fear Street book. It also reminded me of I Know What You Did Last Summer, which I haven’t read, only seen the (extremely high-quality) movie. Caroline B. Cooney would be a good author for fans of this book to check out.